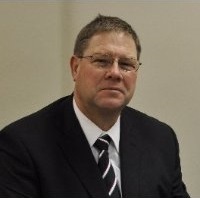 Paul began playing brass instruments under the tutorage of William Newton. His earliest experience was on the tuba and euphonium, before eventually transferring to trombone at the age of 14.

From school, Paul joined the Band of the Scots Guards. During his time in London, Paul played with other ensembles and performed at state and military functions. On leaving the army, there began an association with brass bands that has continued to this day.
In 1977, Paul became a member of the world famous GUS Band from Kettering; at that time, under the direction of Geoffrey Brand. As the band’s solo trombonist, Paul performed in most UK concert venues and toured abroad on many occasions. In 1981, Paul was chosen as the BBC Television ‘Best of Brass’ champion soloist; other highlights included radio performances on programmes such as ‘Friday Night is Music Night’, Radio 3 ‘Bandstand’, Radio 2 ‘Listen to the Band’ and other shows recorded in Holland, Belgium and Switzerland. During his time with GUS, Paul performed under many famous and skilled conductors such as Harry Mortimer, Stanley Boddington and Major Peter Parkes, to name but a few.

After leaving GUS to concentrate on his business interests, Paul continued to conduct various ensembles and brass bands. His reputation for band training is well known and his freelance trombone playing continues to fill some of his time; that is when he is not playing golf!

Paul is certainly no stranger to Haverhill Silver Band, having previously occupied the band’s solo trombone seat. In November 2017, the band were delighted to appoint Paul as our new Musical Director; we look forward to working with him and are very much excited to see what the future brings under his leadership.