The Shepherds Band (aka Loyal Order Ancient Shepherds Band) was formed in 1872 and just like the Haverhill Brass Band, had a busy performance diary throughout the mid-19th and early 20th century. The band regularly gave concerts and performed at various agricultural and horticultural shows, as well as taking part in parades and processions. 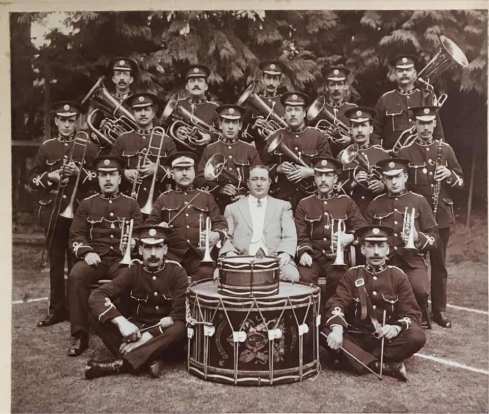 The group disbanded just after the outbreak of World War I and was last recorded performing publicly in late 1914. On the 5th August that year, the band headed a parade of Territorials from the local drill hall to the railway station, where the group of young lads would depart for Felixstowe. The Shepherds were also instrumental in raising money for the National Fund – the proceeds going towards the war effort.

At present, we can identify three bandmasters that led the Shepherds: these being Charles Milligan, Edgar Gunnell and William ‘Wat’ Tyler.

When anyone mentions brass music in Haverhill times past, the name Wat Tyler usually comes up. For more than sixty years, he occupied a very high position. The first instrument that Wat played was the piccolo, but on joining the town band he switched to cornet. When the town band disbanded, he joined the Shepherds Band and when that also folded, he helped form the Co-operative Band.

Wat was clearly a talented cornet player, for on 3rd November 1888, the Bury Free Press printed an article about a concert in aid of the Shepherds Brass Band that took place at the Town Hall on 25th October. Wat played a cornet solo.

When taking over the baton of the Co-operative Band, he proved his worth as bandmaster. The National Brass Band Association presented Wat with a framed certificate in recognition of over fifty years playing. He had played at virtually every local event and is said to have recalled at his Diamond wedding celebration in 1951 the he could remember playing at celebrations for Queen Victoria’s Jubilee. Wat died in 1953 aged 83 years. The Co-operative Band marched in silence in front of the funeral procession and played at the graveside, sounding the last post as he was laid to rest.