Steve’s trombone career took him across the world, touring with The Bert Kampfert Orchestra, The Glen Miller Orchestra and the Pete Cator Big Band, as well as many west end performances including Oliver!, Carmen Jones and Crazy for You. He toured with the Marty Webb band, quadrupling on Trombone, Bass Trombone, Euphonium and Tuba, and had spells in Bournemouth Sinfonietta and The London Festival Orchestra.

In addition to this, Steve has played in some of the UKs most renowned Mod revival band, Currently as a member of the Secret Affair and his Solo project, Rinaldi Sings. 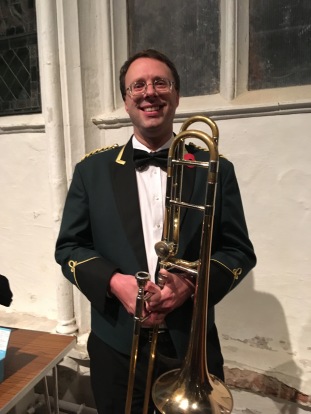 Hailing from West Yorkshire, Adam moved to Cambridge for University studies. Adam has conducted the Cambridge University Brass Band and played trombone and baritone with City of Cambridge Band, Waterbeach Brass and a range of University Orchestras and groups.